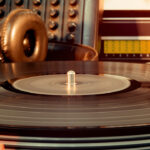 Digging Deep to the Roots

Jeff DeFord was born in 1961 and raised in rural Indiana. At age 13 his junior high English teacher, Mr. Jim Johnson - who also worked weekends spinning records at nearby WSMJ-FM in Greenfield, Indiana - invited Jeff along to one of his shows to help answer telephone requests. The rest, as they say, is history. Even though he was only in eighth grade, Jeff’s enthusiasm was so evident he was asked to join a crew of high school students at the station that produced a weekly program highlighting various academic and sporting events, as well as other campus activities.
After graduating Jeff attended Mesa Community College in Arizona majoring in English and Broadcast Journalism while interning at the campus-based NPR station, KMCR-FM, hosting a vintage jazz and blues show and was the play-by-play voice of Mesa Thunderbirds basketball. Later he worked in the sports department at KOOL-TV in Phoenix reporting from Major League Baseball spring training games and interviewing players, managers, coaching staff and team executives. He also produced, directed and narrated several student orientation films for the school, as well as a documentary for Price Sports Group regarding the progressive changes in sports medicine. After college Jeff moved to San Diego, California, working independently doing voice-overs, commercials, audio book narration and Master of Ceremonies for business parties, company picnics, wedding receptions ​and other public functions. It was during this time Jeff was starting to reconnect with his love of bluegrass music.

Jeff always had a desire to share his collection of vintage folk and old-time recordings he had accumulated over his many years and after considering the new possibilities and eyeing the emerging popularity of internet radio, he realized he could host a show right from home! In 2006 his Bluegrass Roots And Branches show began an eight-year run at WorldWideBluegrass.com, with the old-time sounds immediately becoming popular with listeners of all age groups that were attracted to the unique format. In 2008 Jeff briefly relocated to Nashville, Tennessee, working with the legendary radio station, WSM, on the new Bluegrass Underground show, interviewing artists that performed at the Cumberland Caverns venue. He continued his weekly old-time music show, changing the name to Down To The Roots to better reflect the vintage music played on the program. He was also promoted to general manager and acted in that capacity until November, 2014 when Jeff moved his show to BluegrassMix.com, remaining there until May, 2016.
Info and episodes