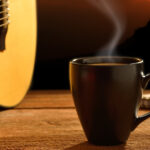 The Larry Stephenson Band highly regarded, as one of Bluegrass music’s most recognizable and finest high lead and tenor vocalists, Larry Stephenson has been headlining festivals and concerts for 30 years.

Larry formed The Larry Stephenson Band in 1989 while living in his home state of Virginia.

Larry’s crystal-clear tenor voice has provided a musical home for some of the finest sidemen in contemporary bluegrass history. Many appearances on the Grand Ole Opry and RFD-TV has made The Larry Stephenson Band a fan favorite all across the US and Canada.

Born in Harrisonburg, VA,and raised in King George, VA, Larry’s Dad put a mandolin in his hand at the age of 5 and by the age of 11, Larry cut his first record. Graduating high school in 1976, Larry and his Dad had a very popular regional band for 3 years, performing at festivals, concerts and regulars at The Wheeling Jamboree in Wheeling, WV. From there, he worked with Cliff Waldron, Leon Morris while soaking up the Washington, DC rich musical scene. In 1979, Larry went to work with Bill Harrell and The Virginians for 4 ½ years and then in June of 1983 went to work with The Bluegrass Cardinals and stayed for 5-½ year. That band configuration is often referred to as one of the “classic lineups of the Bluegrass Cardinals”. Larry also credits the rich music scene of Virginia and Washington, DC for much of his musical success, having seen and heard the first generation bluegrass performers in person and on the radio.

While Larry Stephenson is best know as a touring musician whose voice sets a standard of melody, clarity and storytelling, he has had an active and well-awarded recording career. Starting his recording career for Webco Records of Virginia and then 18 years with Pinecastle Records, releasing 18 albums during that period. Signature songs in Larry Stephenson’s vast catalog in that period include “Patches”, “Yes, I See God”, “Clinch Mountain Mystery”, “Many Hills Of Time”, “The Knoxville Girl”, “The Knoxville Boy”, “The Pretty Blue Dress”, “ I Should’ve Called” and “The Violet And The Rose”.

In 2011, Larry did one recording for Compass Records out of Nashville, TN, “What Really Matters”.

In 2010, Larry along with his wife Dreama started their own label “Whysper Dream Music”. The award-winning “20th Anniversary” was released which included guest performers like Ricky Skaggs, Connie Smith, Marty Stuart, and Del McCoury. It also won the 2010 International Bluegrass Music Association (IBMA) recorded event of the year with the song, “Give This Message To Your Heart” with Dailey & Vincent. Having his own label has proved very successful with many signature songs, “Mule Skinner Blues”, “Pull Your Savior In”, “Come To Jesus Moment”, “Nail My Shoes To The Floor”, “Ruby’s Purse”, “Kentucky Waltz” and “Yesterday’s Gone”. These songs, always delivered with commitment and conviction, are often requested at his live performances.

Another part of Larry’s recording career he’s very proud of, are his gospel recordings. With five all gospel albums and many gospel songs recorded on his secular projects, The Larry Stephenson Band has fast become in demand at churches and gospel concerts.

Throughout his 30 years of fronting his own band, and over 40 years as a major touring performer, Larry Stephenson has been well-recognized and awarded by fans and his peers in the bluegrass industry. With a move to Nashville, TN in 1992, the band became fast regulars on the Grand Ole Opry. In 1996, the Virginia Folk Music Association inducted Stephenson into The Virginia Country Music Hall of Fame. Since that time, he has garnered numerous IBMA and SPBGMA nominations and awards. In 2018, The Society for The Preservation of Bluegrass Music in America (SPBGMA) inducted Larry in their Hall of Greats.

Larry makes his home on the outskirts of Nashville, TN with his wife Dreama and their daughter Whysper.